We’re live at Kickstarter where a 30-day fundraising drive is underway. We need to raise $20,000 by August 15 to construct the first Uni, which will be launched in New York City, Fall 2011. Check out our special Kickstarter Rewards, which will feature the work of our friends at M+E Design. Even small donations help create the momentum we need to have a successful Kickstarter drive. Thanks for your help in spreading the word.

Here’s a snapshot of David Costanza and Alexander Marshall, graduate students at MIT, who are already hard at work on preparations for Uni construction. The guys are leaning on a roto-molding machine they built from scratch specifically for fabrication of the Uni cover elements. David and Alex are part of a great team, and a growing team, which is putting in long hours to build, launch, and operate the Uni. 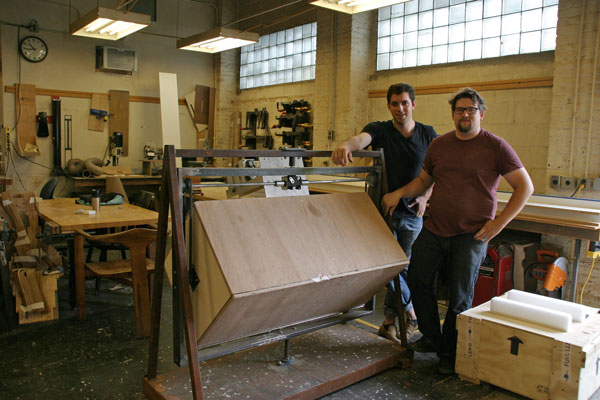 Stay tuned as we introduce more of the people behind the Uni during the fund drive. And, there will be video of that machine rotating simultaneously in multiple directions.