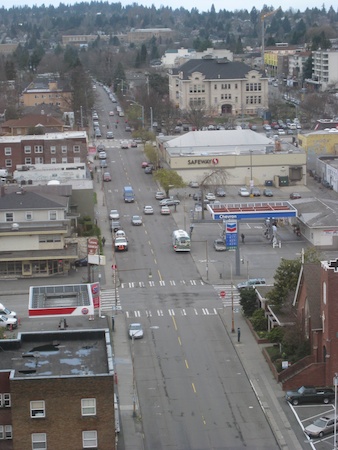 [Another post from Sam visiting libraries and public spaces on tour—explanation here.]

Here in Seattle, I received a tip from a friend of the Uni: Seattle Public Library Bookmobile parked at a nearby Chevron station. I could actually see it from the hotel window.

Hustled downstairs, looking to talk shop with the onboard librarians, but I was too late. The extraordinary bus was already on the move.

Here at the Uni Project, we’ve been thinking about portable learning environments for some time, including the bookmobile concept.

During our Kickstarter run, we were asked why we didn’t mount the Uni on a truck or bus. Our answer:

We thought about various container solutions and even bookmobile approaches, but decided lightweight and scalable was the key to gaining a foothold for this kind of program in urban space, especially New York. We also discovered that bookmobiles have been dying because of operational costs (eg. gas), and we have a sense that people don’t like the capsule-like atmosphere when you step inside a vehicle or even some temporary structures. So we asked the designers to create a system that we could adapt to all sorts of locations, indoors and out, at half-scale as a 4 ft cube, or even as a linear shelf that hugs the contour of building.

That said, whether deployed at partial or full scale, we really want to offer a safe, inviting “space” where people feel comfortable gathering, sitting, listening, and reading. We aim to be much more than a bookshelf. The benches and tables are going to be key.

And here’s a parting shot from Seattle: the bookmobile I missed by seconds. 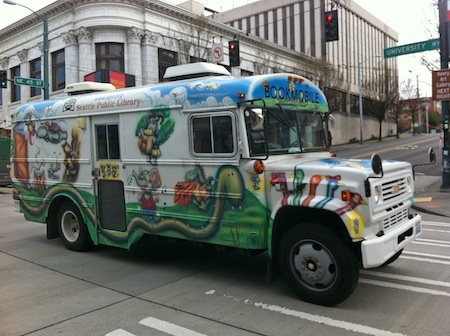