We’re honored to announce that the Uni has been awarded a 2013 Innovations in Reading Prize from the National Book Foundation. Each year, the Foundation recognizes individuals and institutions that have developed “innovative means of creating and sustaining a lifelong love of reading.” Last year, for example, our friend and inspiration Laura Moulton received the prize.

Thank you to everyone who has helped create the Uni: designers, fabricators, installers, librarians, teachers, volunteers, funders, and supporters. We launched less than two years ago on Sep. 11, 2011, and we plan to keep rolling with our vision to bring books and learning to the public spaces of New York City neighborhoods.

Speaking of rolling, in the next 72 hours, the Uni will deploy three times in three days in three boroughs: Bronx, Brooklyn, Queens. Look for us in the South Bronx in support of MS223’s Community Reads Night initiative, and then in Clinton Hill, Brooklyn in support of an emerging pedestrianized plaza, and finally at Corona Plaza under the 7 train in Queens to reunite with residents there. Details here. See you on the streets of New York. 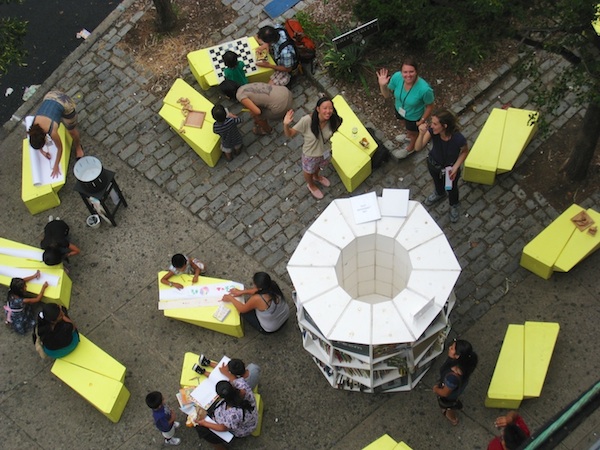