Library Journal described the Uni as one of several “groundbreaking ideas…that could stimulate out-of-the-box thinking on how to impact library users in fresh ways.” 2013 Innovations in Reading Prize from the National Book Foundation.

Featured in the US Pavilion at the 2012 Venice Architecture Biennale (Spontaneous Interventions).

How Boston Could Save Winter by Finally Doing Something Fun with Its Streets
Oct 29, 2020 | Boston Magazine

Opinion: How to design a street for hands-off play
Sep 21, 2020 | Atlanta Journal-Constitution

Weekend Walks in NYC (The Uni Project partners with NYC DOT to being reading rooms to these events.)
April 15, 2018 | NY1

What Being a Rock Star Teaches You About Practical Urbanism
April 12, 2017 | CityLab from the Atlantic 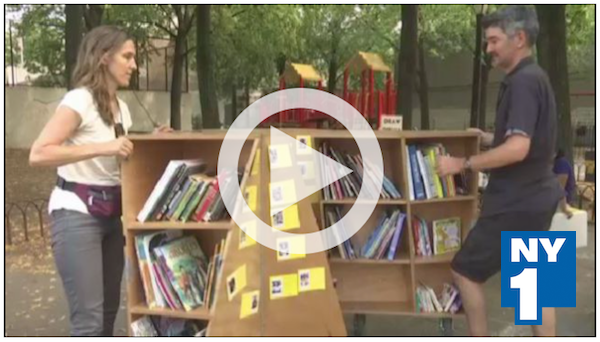 The City As A Sequence Of Interiors: An Ecological Approach To The Design Of Public Spaces (Cristina F. Colombo)
Dec 2015 |  Bollettino Del Centro Calza Bini

The SoHo Memory Project, A Mobile Historical Society for the Iconic NYC Neighborhood
May 13, 2015 | Untapped Cities

3 Kinds of Temporary Public Spaces and the Cities Who Love Them
Mar 31, 2015 | Medium

Making a Place for Books and Learning in Almaty, Kazakhstan
Oct 20, 2014 | The Bradley Herald

Daring Public Interest Design: 10 Architects Set to Save the World
May 1, 2014 | Architizer

Featured in Campaign for a Commercial-Free Childhood’s Countdown to Screen-Free Week
May 1, 2014 | CCFC

Reading Rooms Will Be Popping Up Around NYC This Spring
Apr 11, 2014 | Galleycat

Marginalia: Little Libraries in the Urban Margins
May 22, 2012 | Places: Forum for the Design of the Public Realm

Almost a bookmobile, not quite a library
Aug 23, 2011 | Out of the Jungle, Thoughts on the present and future of legal information, legal research, and legal education.

Using the Cube To Bring Back the Book
Jul 28, 2011, by Michael Kelley | Library Journal

Fall Preview: Open-Air Reading Capsule in a Neighborhood Near You
Jul 28, 2011 | by Kelsey Keith | Curbed

3 things that inspired me this week
Jul 21, 2011, by Jan Homquist | janholmquist

View press about the Storefront Library and our other projects prior to 2011 over at the Street Lab web site.