Nearly a year ago on July 22, we temporarily suspended our Uni Kickstarter campaign when we learned what had happened in Oslo. Later that week, I wrote:

[We] suspended our fundraising outreach for a time while our thoughts were with Norwegian friends. We’re returning to work, but we are not turning the page. All cities rely on a special kind of public trust necessary for living so closely together, but in Oslo (and all Norway perhaps) this trust runs especially deep. We have always admired this and sought it for our own community. It is incredibly painful when this trust is broken and children are victims. It makes us determined to build cities where this kind of harm is even more rare. Peace.

Today, I’m in Oslo, staying a few blocks from where things started to go horribly wrong nearly a year ago. On a walk this morning, I recalled feelings in New York that accompanied my own return to daily life in Lower Manhattan over a decade ago. I remember that familiar things, like walking to the park with my daughter, seemed alien. And I wanted that feeling to go away, but all at once, I didn’t want to let go or forget. I imagine some Norwegians feel this way now.

I know that the Uni, for Leslie and me, is part of a process of rebuilding. From time to time, horrible things happen; there are violations of the trust underlying our cities and societies. But, what we do the day after, and every day thereafter, to pick ourselves up and keep going, is most important I think. In that light, the Uni is simply the tool I was wanting on Sept. 12, 2001 to take back my neighborhood and my life.

This morning, I was drawn to a square in downtown Oslo, where Norwegians did something remarkable to take back their city. Of course, Norwegians know something about resistance (See Wiki: Norwegian Resistance Movement). But more recently, this April, over 40,000 of them gathered in a square in the heart of Oslo for a simple, defiant act: sing a song. (In a nearby courtroom, the accused murderer sat and most likely heard the rendition of a song celebrating racial harmony that he had professed to despise.)

I love how a public square, a fairly dreary one actually, became alive with meaning because of what people gathered to do. The history of this Oslo square was written that day, not by urban planners, politicians, architects—the professionals who tend to take credit for making great places. Often, the most remarkable things in our cities, just rise up and happen, I think.

Today, the square was getting ready for a public market in a light rain: 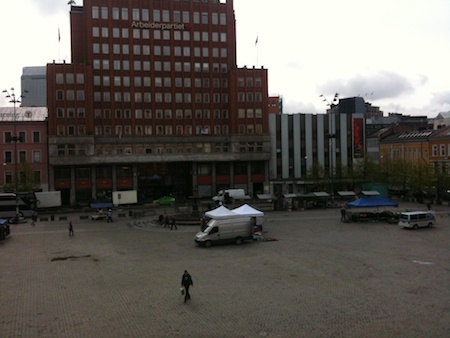 I cleared my head with a walk to the water to visit the stunning Operahuset, designed by Snøhetta. I deeply respect the talent and effort of all who built it, but I feel like the elegant place has yet to be filled with the meaning of the more pedestrian square nearby that was overtaken by a single song. That said, this opera house was built to last by an enduring people—I expect that something remarkable will happen here too someday. 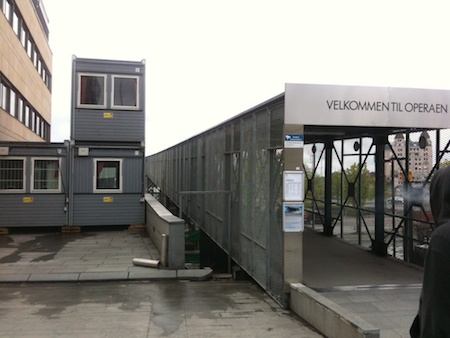 PS. There is a new movement to use containers to seed more culture and retail on the Oslo waterfront, actually. More on this in further posts.